Professor Steve Horwitz is this year’s KEFiM’s Prometheus Awards 2019 guest of honour and the recipient of the Promotion of Economic Literacy Award.

Professor Horwitz is among the most prominent contemporary representatives of the Austrian school of economics, the ideas of which he promotes with commitment, dedication and effectiveness both to the academic, and the general public.

Amongst his main academic interests is the monetary theory and macroeconomics, the history of economic and social thought with emphasis on the work of Friedrich Hayek, as well as the economic and social theory of the family. His monographs include Microfoundations and Macroeconomics: An Austrian Perspective (Routledge, 2000) and Hayek’s Modern Family: Classical Liberalism and the Evolution of Social Institutions (Palgrave, 2015). He has been the editor of important collected volumes, in which he has contributed original papers on economics and the Austrian school.

Steve Horwitz’s contribution to the liberal movement and economic literacy is very significant. He has collaborated with the Cato Institute, the Institute of Humane Studies, the Foundation for Economic Education, the Fraser Institute and the Mercatus Center at George Mason University, in publishing a plethora of pieces that popularize the ideas of freedom and liberty and apply them in current matters, such as the management of natural disasters like Hurricane Katrina. He has also produced a series of short videos for the American LearnLiberty, he has been a frequent guest at his nation’s most well-known and respected media, while he also writes for the Bleeding Heart Libertarians and Coordination Problem blogs. Many of these videos have been presented to the Greek public by LearnLiberty.gr, while his articles are often hosted in the Think Tanks section of liberal.gr, a project curated by KEFiM. Through his multifaceted academic and public activity, Professor Horwitz has made substantial contributions to the dissemination of the economic way of thinking and the critical examination of commonly held misconception or biases that influence the way people understand the role and meaning of economics.

His tireless defense of classical liberal values, his continuous exploration of new fields for their application and current examples that underline their importance, his extensive authoring work, his humour and his knowledge-sharing abilities make Steve Horwitz a worthy successor of Friedrich Hayek, Ludwig von Mises, and Carl Menger. In an era like the present, when the need for an energetic, well-informed and persuasive defense of liberty against its opponents across the globe has again become imperative, scholars like Steve Horwitz provide us with solid arguments and a valuable exemplar of action and involvement for every friend of liberty. 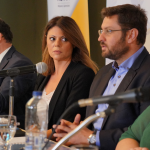 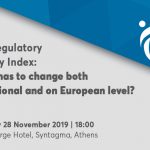