Petros Doukas was born in 1952 in Athens.

He studied Economics and International Relations at George Washington University, he holds a Ph.D. in Economics from New York University (NYU) and an MBA from Columbia University. He has been, among many others, a Citibank executive in New York, as Vice President, Country Head & Treasurer of Citibank Greece, and Chairman of Board of Directors of Heracles, Ericsson Greece, Pepsico Greece, Nova PayTV Group. He is also President of Capital Partners SA, Mergers & Acquisitions Advisors. Petros Doukas has served as Deputy Minister of Finance & Deputy Minister of Foreign Affairs and Member of the Region of Attica. In 2019 he was elected Mayor of Sparta. 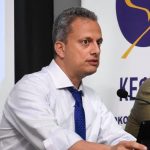