Markos Dragoumis, whose name we proudly carry, was one of the most important Greek champions of liberty of the 20th century. Dragoumis began his intellectual journey with marxism, then joined the struggle against the dictatorship in Greece during the 1970s, and found his home in the ideas of liberty shortly after. A prolific author, Dragoumis published numerous articles, studies, and books on economics, politics, and history.

Prior to his death Dragoumis donated to KEFiM the royalties from his seminal work, The Road to Liberalism, which attempts to record the way forward for freedom in Greece. In 2015, his surviving spouse Lena Dragoumis and her family, generously offered KEFiM the use a Neoclassical building in downtown Athens, to serve as our offices and the Dragoumis Archive. For us, Markos Dragoumis captures the essence of what Greece needs right now: to turn away from the ideas of far left and collectivism and champion the ideas of liberty. 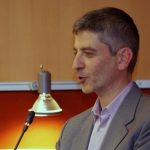