Greece ranked 29th among 35 OECD countries on the Tax Foundation’s International Tax Competitiveness Index study for 2018, presented for the first time in Greece by KEFiM.

As far as corporate taxation is concerned, which, according to the OECD, has the most significant impact on economic growth, Greece has dropped 10 positions in the last five years – from 15th place in 2014 and today the country ranks 25th. As highlighted in the study, corporate tax rates in Greece are at 29% or 5.1 points above the average of OECD countries.

Correspondingly, Greece dropped 6 places in property taxation and two in consumer taxes, having one of the highest Value Added Taxes (VAT) among OECD countries, higher than the Organization’s average by 4.9%.

You can read more about the International Tax Competitiveness Index here.

The Research Analyst of KEFiM Constantinos Saravakos made the following statement:
“Greece’s disappointing performance is yet another warning that if we want to end the crisis and to ensure strong, sustainable growth and job creation, we have to move decisively towards a drastic tax reduction, both for individuals and businesses; a reduction that can only be achieved through the corresponding reduction in the size of the state.” 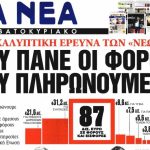